Nitrogen in the Soil 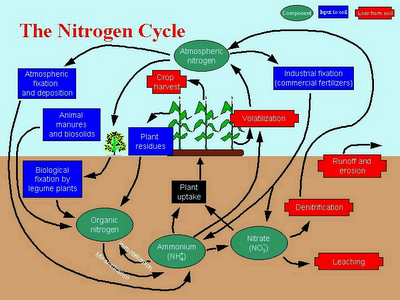 An experiment conducted by the Thermal Biology Institute of Montana University examined the nitrogen cycle in geothermally heated soil in Yellowstone. The affected areas of the park were Rabbit Creek and Firehole River. Nitrogen transformations observed were nitrogen fixation, ammonification, nitrification, and denitrification. Nitrogen is a component that is required by in substantial amounts by all organisms. The nitrogen cycle involves multiple changes in the chemical form of nitrogen. Certain prokaryotes fix atmospheric nitrogen, converting it to ammonia and nitrate. In this form, plants and algae can utilize the nitrogen. Other organisms return nitrogen to the atmosphere by breaking down ammonia, or other nitrogen compounds. Ammonia can enter the atmosphere directly from soils. Research suggests that autotrophs in Yellowstone are responsible for the oxidation of NH4 in the soil to NH2. However, temperature is a major factor concerning the nitrogen cycle in this particular soil of Yellowstone. Microorganisms in the soil are capable of many nitrogen transformations, but in particular temperature conditions. Nitrogen fixation took place between 50ºC and 65ºC. Changes in the temperature balance in the geothermally heated soil can affect the nitrogen cycle and the microorganisms living in the soil. Further research is being conducted on the topic.

How Do Humans Affect This Cycle? 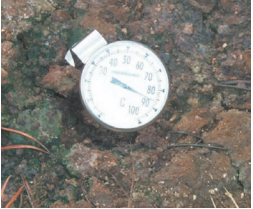 Humans can upset this gentle balance of nitrogen through many different activities. These include the burning of fossil fuels, the use of artificial fertilizers, and sewage dumping. However, the use of artificial fertilizers would not apply particularly to Yellowstone because of the maintenance of a natural ecosystem. In water systems however, an increase in nitrogen can lead to anoxia or hypoxia, which are absent or low oxygen levels. This can cause altered biodiversity, affecting the microorganisms that are present in Yellowstone’s soil. A change in microorganism population can negatively affect the food web of Yellowstone. Outside the scope of Yellowstone soils, the increase in nitrogen can negatively affect the development of algae in the bodies of water. Toxic algal blooms are associated with high fish mortality in some areas. Declines in biodiversity can be seen due to human activity effects on the nitrogen cycle in Yellowstone. Decreased biodiversity and nutrient imbalance in trees mark two negative effects to unnatural changes in the nitrogen cycle.

For more information on the study described above:
http://www.rcn.montana.edu/pubs/pdf/2005/2_10Burr.pdf